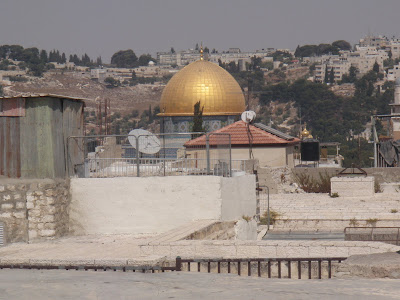 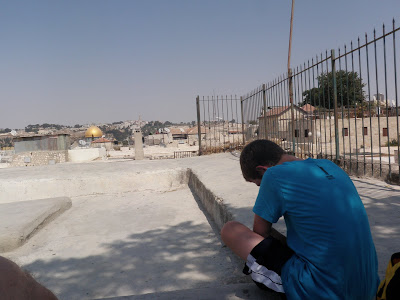 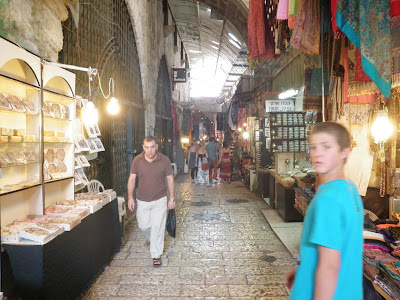 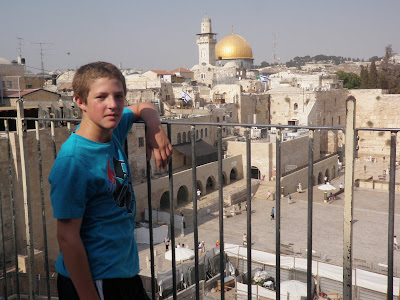 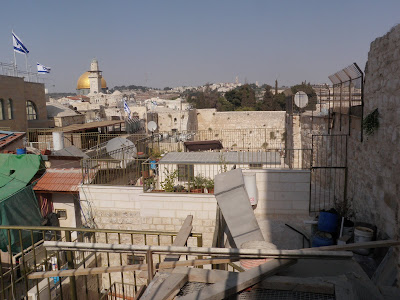 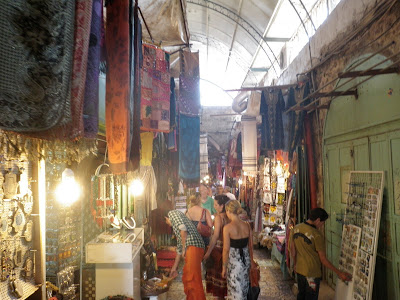 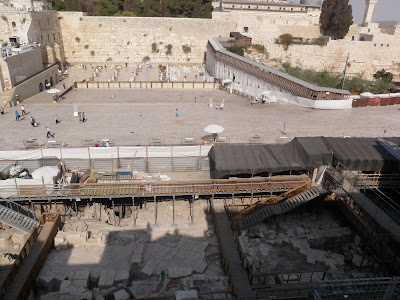 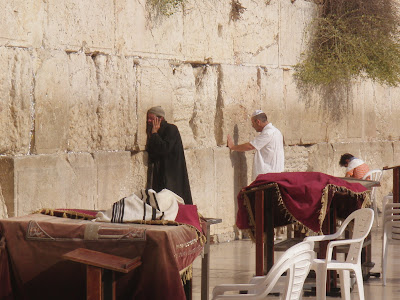 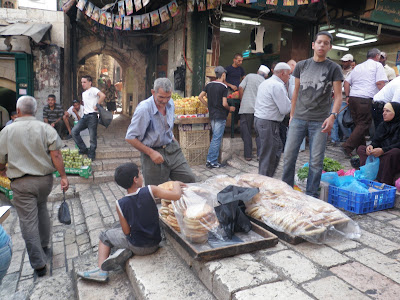 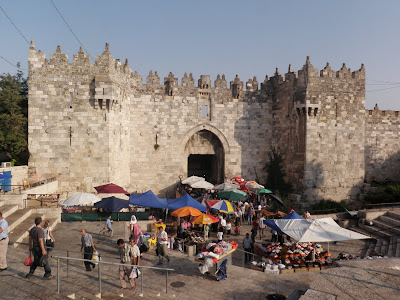 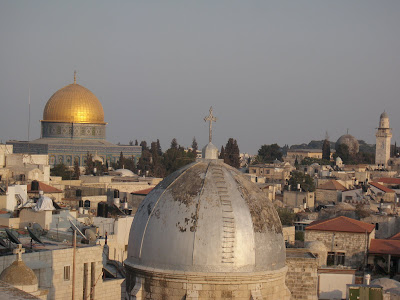 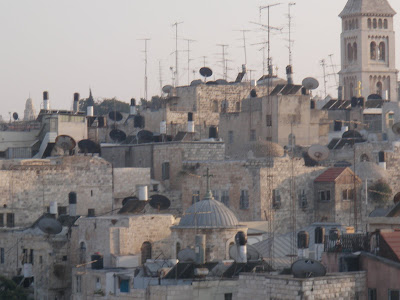 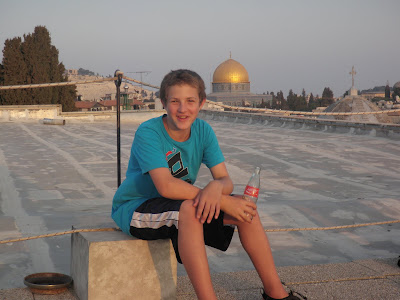 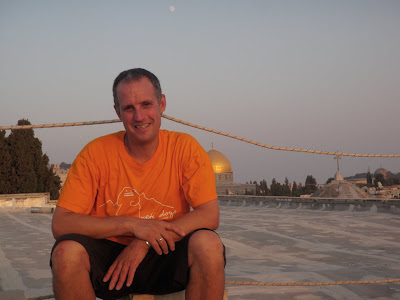 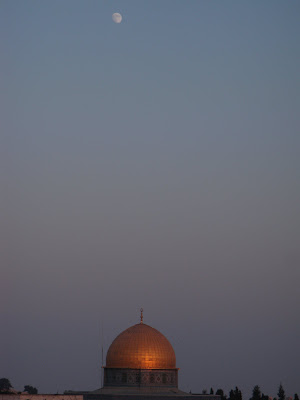 8.21.10
Micah and I went to services today at a synagogue called Shira Chadasha, there was a separation curtain with the bima in the middle of the curtain so there wasn't total separation and women were full participants in the service, in fact all the leaders of the synagogue appeared to be women. It was a sweet service, and again most importantly it was air conditioned. The heat is still an issue, this couple from Hong Kong that we met in an arab restaurant in the Old City said it was 42 degrees today which I think translates to something over 100 maybe even 105... Back to synagogue, children came in and out quietly checking on their dads (remember I was on the guy's side, they were probably checking on their moms as well - there was a separate kids service) Everything was in Hebrew, and as I explained to Micah later who is just laughing at the fact that David's daughter Mika who's bas mitzvah is in November hasn't even started her studies for it - it would be like Micah singing the bible in english - she doesn't need to learn a language, it is her language...I was asking Micah to imagine singing his portion in English " and Balaam hit his donkey..." in song. So services are in the language they speak everyday, the prayers are in the language they speak everyday. There were a lot of people smiling at services today, Micah even commented that they really seem to be enjoying themselves a lot. After services there was a kiddush lunch and then all you heard was english - mostly americans, some brits, our guide Jamie was there - he's a member of this congregation. Anyhow, it was a really nice service, first time I have ever been to synagogue in Israel, yet Jerusalem, a sweet way to start a day, no buses running, very few stores open, we went home to rest and change our clothes, lay down for a little while. I was falling asleep when Micah woke me up and said it was time to go and so I got up and off we went into the hot streets of Jerusalem at about 2 pm and we headed to the Old City which we wandered and wandered, had lunch at an air conditioned arab schwarma place, and then reentered the heat and wandered and wandered to the Wailing wall and continuously through the Arab market, which at times got interesting when we walked through the very Arab sections - the stores more utilitarian then junky touristy stuff and at times crowded with arabs, selling pancakes, bread, fruit and vegetables, televisions, computers, arab dresses, kids clothes, toys. The most memorable scene of the day...
Near Damascus Gate
inside the Old City
the bustling arab shuk
young boys yelling at the top of their lungs
selling pita, fruit, sesame bread
women in long dresses and black head dresses selling fresh mint and parsley
sitting on the ground in the middle of the path
a man is pushing a large heavy wooden cart uphill along the path
a man with a walker is walking downhill
his son behind him trying to help him, watch him
the man pushes the cart as hard as he can up hill
but keeps falling back, the man with the walker
is now right next to the cart, slowly going down
next to the market stalls, the cart pushes up just missing him
just missing the women selling fresh mint
the man with the walker makes it down,
the man with the cart makes it up
Micah and I continued to walk around the market looking for the Austrian Hospice, which we had heard was a great rooftoop to watch the sunset from and so we walked and finally started asking police officers where it was and we found it, but the door was locked, so we looked for another way in and then we went back and rang the bell and they let us in and we wandered to the rooftop up a bunch of stairs, bought a couple of cokes and relaxed in the cool breeze as the sun set behind the hills of Jerusalem taking pictures and writing...
the sun sets over Jerusalem
a rooster crows
guess, he's got things a little backwards?
the sun reflects in the gold dome
of the Temple on the Mount
the moon rising above
we sit inside the Old City
on top of a roof
car horns blow in the distance
muslim prayers are bellowed through 3 large speakers hanging over the hill
green neon lights come on in some towers
birds chirp, white doves gather on a red tiled roof
a man hammers
israeli flags fly in the breeze
as the sabbath slowly ends
and a new week begins
We then wandered out of the Old City through Damascus gate into the New City where we found a cab as the buses still weren't running and nothing was open and went home for yet another rest before heading out for dinner...I was able to get on line and we were able to skype with Jackie, Howie and Stan. Everyone looks great. It always makes me a little lighter on my feet if I get to talk to Jackie, and to see my Dad who looks really great and Howie who is such a ham just loves dancing in the background as Jackie and I touch base on stuff... and then after checking e-mails and blogging just before 10 Micah and I headed out for dinner, and the streets were packed and the restaurants were full - we shared an Italian meal, a huge salad and a creamy fettucini dish and then on the way home bought Micah's new favorite dessert, the Himalaya... which we ate in bed... good night.
Posted by mark at 3:49 PM