11/28/2010 6 pm.
Sunday Evening
spent the day watching football with Dad
a slight headache
Jackie spent the day on her computer
at the kitchen table
Dad watches a lot of television
right now he's watching 60 Minutes
we watched a lot of 60 Minutes growing up
we watched a lot of television growing up
t.v. still has that magical quality for Dad
right now he's watching 60 Minutes very loudly
right now Andrew is on the computer researching colleges
Jackie's making turkey soup
I'm reading poetry and listening to Jackie and Andrew
right now Jackie is talking about college core classes
Andrew is laying on the floor petting Buddy
our little white dog
Posted by mark at 11:30 AM No comments:

I haven’t blogged in 3 weeks. Getting time alone to think has been a problem lately. Life has been busy with life. I am not going to try to give the blow by blow of the last few weeks that would be exhausting and quite boring. I have always liked the idea of blogging every day with photos because I always find meaning in the details of life, but sometimes reporting those details becomes a burden instead of a pleasure, and sometimes it is more important to let it all sink in and then the significant moments of our daily lives will implant themselves in our memories forever and ever and I can then write about those moments instead of all the moments….

So on October 28th, Jackie, Stan and I embarked on a trip to Washington D.C. to visit with his sister Joan and her husband Donald who was in failing health. Jackie and I also planned to attend Jon Stewart’s Rally to Restore Sanity on the Washington Mall plus maybe getaway for a few days on our own leaving Stan with his sister and brother-in-law. Things started off as planned. We arrived late Thursday night, my Aunt Joan waited up for us, we visited, and in the morning and all day long we visited with Joan and Don talking politics, family and memories. It was a nice day, we also met their wonderful neighbors, Richard and Rung, who joined us for dinner. Donald who was too tired and worn out from the day did not join us for dinner, he had dinner alone in his study, with on and off visits from one of us. It was a very pleasant day.

In the morning Jackie and I were off to the Washington Mall, taking the Metro, with throngs of other like-minded Americans. There were 200,000 people crowded into the Mall with people wandering the closed off streets, there were lots of semi-political signs being held up by the attendees. There were jumbo-trons and loudspeakers set up to help people see and hear what was basically a comedy show being filmed in front of a ridiculously large audience. Jackie and I both wished as we stood amongst the crowd that we were there for something more inspiring and more meaningful. The people watching and sign reading was fun. Eventually about half way through the show we left the giant crowd at the mall and walked around – ending up at a bar with the end of the show on the television. After the show was over we put our name in to get a table, (the bar/restaurant was packed) we sat outside on the curb and watched all the people march down the street towards the Metro.

That’s when I called my Dad and found out that Donald had taken a turn for the worse and a friend of theirs was going to take him to the hospital. Donald was yelling at my Dad not to tell us anything, they wanted us to have fun, without worrying about them. So we tried to have fun, we ate our late lunch (which was our first meal of the day – we were starving), had a beer and then entered the still continuous throng of people to the Metro station, where we inched our way to the train, a bit worried that we would never get home, especially since we did feel like we should never have gone in the first place.

So here I am filling in all the details again. Don was at the hospital when we got back and eventually I received a phone call to go and get them, they had done all the tests and they were sending him home. I drove to the hospital, which was only about 15 minutes away. I told the receptionist/security person why I was there and 5 minutes later Donald and Joan walked out of the emergency room and I helped them get into the van. Back at the house we slowly helped Donald into the house who walked on his own, rested in the vestibule, and then one set of a stairs at a time made it up to the kitchen and then after a visit, a rest, and some soup in the kitchen, up the stairs to his bedroom…

And then came Sunday. I will spare everyone the details here. It was not a good day, but by the evening everything seemed to settle down and things seemed O.K., until the middle of the night. I was sitting in the living room (2 floors below their bedroom). It was probably 3 or 4 in the morning. I couldn’t sleep, so I sat in the living room and read. I could hear noise upstairs, eventually I wandered up, Aunt Joan was coming down the stairs. “I’m calling an ambulance.”

So that was Sunday, the details of that day and the days that followed were very private, very emotional, and very touching.

My last words to Donald on the Friday that we left, he was laying in his bed in hospice in his own house, “Have Peace” and he responded, “I will.”

Those are the only details I care to share. He died 5 days later on Wednesday, November 10th, at 3 am at home with his family.

And so that has been what has been going on, plus our life of work at the store, Micah and Howie’s basketball games, taking Andrew to check out the University of Missoula campus, taking care of Stan and making sure he’s holding up emotionally as he truly feels the loss of his brother-in-law, a man he has known since he was nine years old. “9 year old Stanley” were some of Donald’s last words to his brother-in-law Stan….

Time for me to go get Dad from his house for our Sunday, here at home in Big Sky, the snow flying, a Sunday brunch with just Dad, Howie and I, the snow falling out of the sky….

Stan telling us a story on our way, waiting for our first flight out of Bozeman... 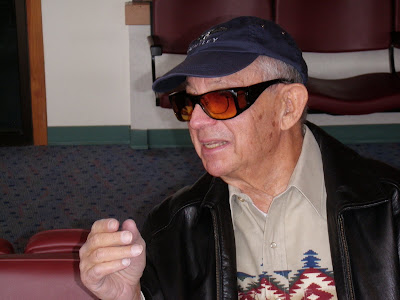 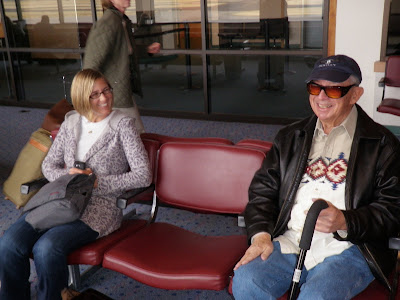 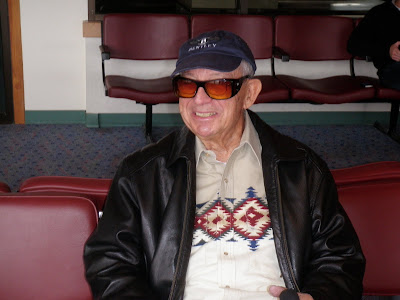 The rally on the Mall in Washington D.C... 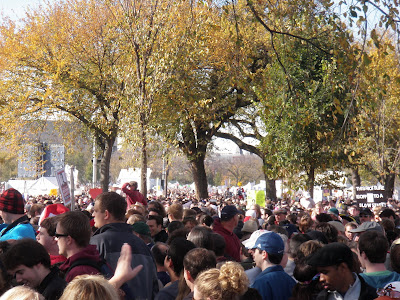 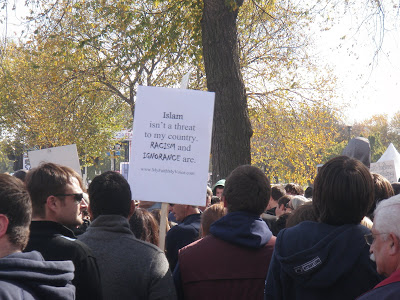 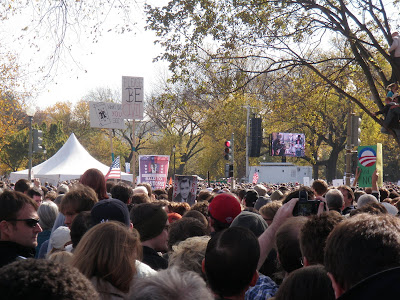 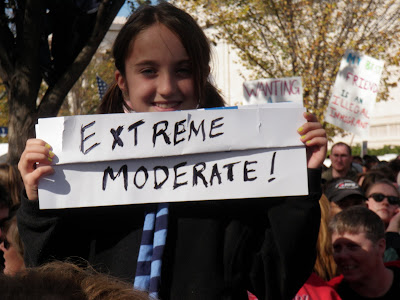 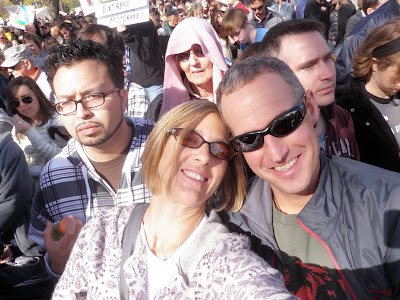 Our favorite sign of the day was one I didn't get a picture of, it said, "You can have your own opinions, but you can't have your own facts..." 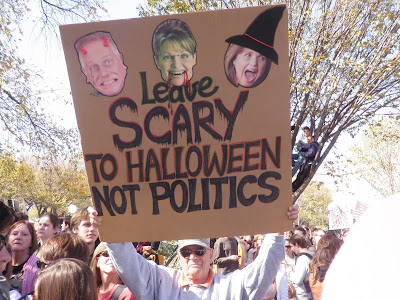 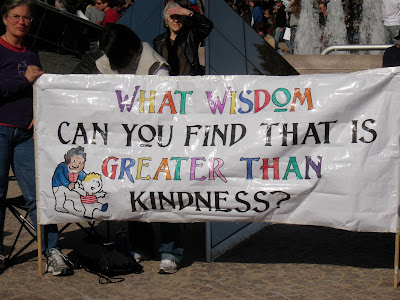 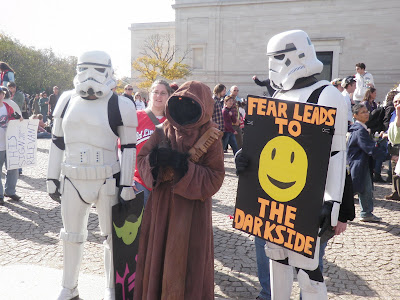 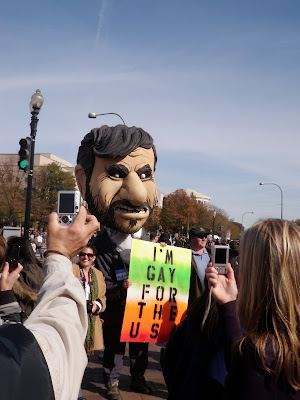 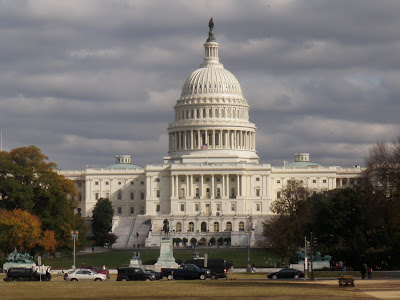 My attempt at an art photo, walking through a tunnel between national art museums... 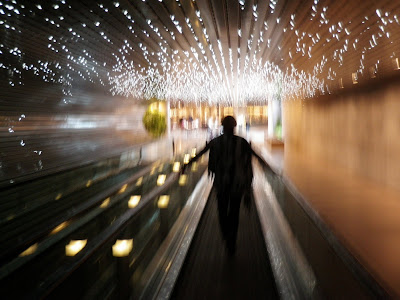 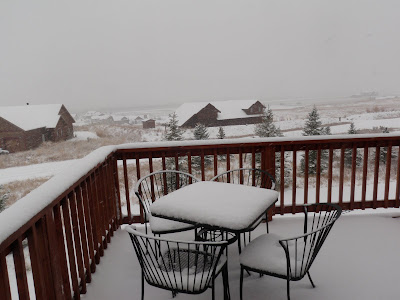