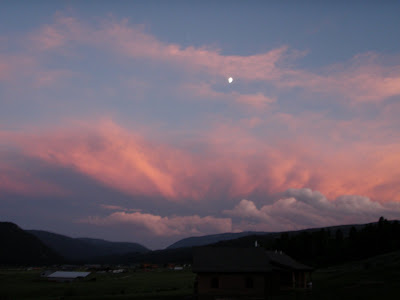 No rain today. rode the bike, walked the dogs, read Jackie's e-mails. always good to hear from her directly. All is good, they are in transition, heading to Kwisero from the rainforest. I  left the boys asleep in the house and went to work.  Laila greeted me with a story of a woman customer who ordered a dry single shot cappuccino and stuck her finger in it and complained there was no coffee.  Then there was the customer who walked into the store took a wagon and put a bag of ice and a box of ice cream sandwiches in it and shopped for an hour.  He was a nice guy, who I helped out with his groceries.  He dropped his change on the parking lot into a puddle and told his 5 year old daughter to just leave it.  I saw a quarter on the sidewalk and gave it to her and told her to put in her piggy bank.  She laughed and said, "I'm on vacation.  I didn't bring a piggy bank."  I told her she should have a traveling piggy bank, "you should get all of your Daddy's change and put it in a bag and save it you will grow to be a rich woman."
The day seemed to be a little bit busier with customers, but quite manageable.  At about 1 pm I went home and picked up Micah and Howie and took them to the skatepark.  I went to the gym. I had a good long workout, pushing myself.  At about 3 pm I picked them up and took them back to the store.  I was greeted by Lauren, with, "We have to talk."
"What about?"
"Well, when I walked in Drew and Laila were fighting and walked out. I also got a call from an unhappy cusomer, her sandwich was messed up."  And so it was time for me to put out fires.  I had to go back to the skatepark to get Micah's cell phone - he left it there.  On my way I called Laila.  After I got back I went around and talked to everyone who was in the store one on one about how important it is to be nice to the customers.  Then I called Drew and talked to him over the phone.  I offered to drive up the mountain, but he didn't want me to do that, he just started talking.   Meanwhile Howie was getting bored.  Micah was scheduled to help put away the Nature's Best order so he worked.  Beth Hoffman saw me outside getting off the phone and called me over to tell me about the Summer Library session that was starting right then and the flyfishing clinic for kids on Friday.  So I grabbed Howie, said goodbye to work and took him to the library.  We got there at 4:30 - it started at 4, and it ended just after 5, but Howie liked it.  I walked the dogs around for the half an hour, then talked to Kathy House about Jackie in Kenya while Howie played a little computer, then it was home for a game of basketball horse and then I took Howie swimming at the Whitewater and sat and read till about 7.  Micah didn't want to come home yet, so Howie and I went home and I did some house chores, fed the dogs... oh yeah Murray, I called the vet about her nose, hot compresses, neosporin and this cream which I found in the medicine cabinet which we still had from the last time. It already looks a lot better.  Howie obviously recovered from whatever his episode was last night.
Micah called and said he wanted to go back to the skatepark - so Howie and I picked him up at the store, and we went to the skatepark.  I tried to fish a little, Buddy got really muddy, and then we walked back to the boys skating who were very hungry and ready to go home. It was almost 9 pm.  The day always seems to get away from me.  I saved this fortune cookie fortune awhile ago and it fell off the fridge tonight while I was getting my ice cream: "you'll accomplish more later if you take some time for yourself"  I need to take some time at home "doing nothing" I don't let myself have any time until the day is over.
So after waiting for the flag man we finally got home.  Sprayed Buddy's paws with the hose.   Anyway we still needed to have dinner. Micah had this new idea for hamburgers, two thin patties with cheese in the middle smashed together to make a big fat juicy burger.  And it worked - the burgers were pretty good. The sky was unbelievable when I turned on the grill. Beautiful sunset of whirling pink clouds and the half moon.  The boys picked a garlic head from the garden, but it seemed to me it was more like a garlic chive, not a full head of garlic, but it tasted good, we sauteed it with the braising mix from the farm in some ginger sesame sauce, a nice healthy side dish to the fat burger.
It is now 11:30, which somehow has become the boys summer bed time, no big deal unless there is a morning event. Tomorrow is an open day.  Mets have an afternoon game, which is what they had today and won 1-0 probably Howie and I believe because we didn't watch it.
Plan on going in early tomorrow and leaving early.  Maybe spend most of the day at home - maybe walk down to the river.  I'll let you know.
Posted by mark at 11:05 PM