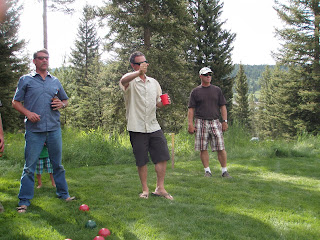 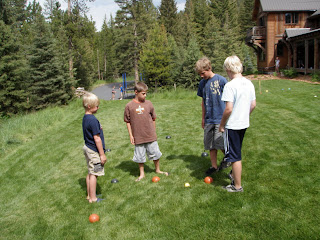 So I had 4 different partners and lost 4 times.  I even somehow got into the championship game and lost.  I played well, but I still lost every time.  I came early, left late and lost.  Never made it to Limberfest, just didn't make sense with Dad and all.  A party at John and Laura's much easier to handle than a block party with Dad and the kids.  Left the dogs at home and it appears they did well.  Buddy is learning from Murray that you can be left at home for awhile and do no damage, though a couple of shoes were moved around and he's been chewing on this address book.
Bocce ball party was a lot of fun, but I'm sure all my partners were a little disappointed though I thought I played well, just couldn't hold a lead.  I guess I was playing like the Mets...
Howie  and Micah had fun.  Howie had a tough time at the beginning of the party, but in the end had a really good time. He refereed at a lot of the games continuously jumping over thrown balls just for fun.
The day was mellow.  I woke up first and walked the dogs, by then it was almost 10 am already.  Dad and Howie were up.  I put on some music, made coffee and started prepping breakfast.  We sat outside on the porch and had Micah's favorite breakfast, homemade potatoes, veggie omelette, juice, bacon and a bagel.  At about noon Dad, Howie and I took a walk with the dogs. I wanted to show Dad how he could take a walk around the neighborhood and that it would be plenty of exercise for him.  When we got back we watched the Yankees for awhile and then around 3 o'clock we headed out to the party.  A very mellow crowd, lots of kids Micah's age, no one Howie's age.  Lots of conversations and Bocce Ball. At 5:30 I got Laura to turn on the Mets game for Dad.  Howie watched some of it with him, so did I, but for the most part he watched it by himself.  He came out and joined the conversation after the game, had a hamburger soon after we got there as did I.  It was just a fun mellow party.  I just lost every game.  Well, Curly and I beat the kids one game, but I lost 4 times with different partners to different teams.  Just couldn't get it together.  When I got to the party Laura teased me, I had sunscreen on my ear and my shirt collar was messed up.
Didn't leave till after 10 pm, never making it to the Limber Pine block party.  I wanted to go and could have tried, but it was late and Dad was tired and the dogs needed to be let out, plus I drank too much and needed to rest.  Hope to go fishing with Dan tomorrow, we'll see.  Need to have Micah and Howie at the Conoco at 9 am.  Laura will be taking them to Billings for their basketball camp and I won't see them until Thursday night around 7 pm.
I might need to deal with Murray, her left eye is been secreting and looks bloodshot, she might have something in her eye.  I noticed it this morning, she seems fine, but it is very red.
I'm tired and need to get into bed.
Posted by mark at 12:03 AM