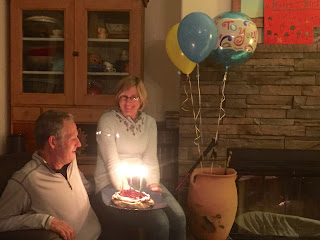 The day began slowly like all my days begin these days.
After doing my exercises I lied down in bed again to rest.
Jackie was getting ready to leave for work and came to my side
in tears telling me how much she loved me.

I didn’t need to get dressed this morning because
Sara was coming over to the house to do energy work with me.
In fact everything planned was at the house
so I wouldn’t have to venture out unless I wanted to.

Grandma Peggy helped me with my breakfast and at 10:00 am Sara appeared with her little Chihuahua Nala, who at some point during any massage will get up on the table and rest on your crotch.

It was our first session at the house so Sara got my father’s massage table from our pile of Stan downstairs. Sara bought that table for Stan a few years ago as she worked on him weekly the last few years.

I got up on the table in my jammies and our session began.
It was a very intense session, lying on my father’s table, unable to go to Sara’s studio because of an unsafe staircase.  I talked to her about my cranio/sacral session with Josh the day before and how he had me say out loud , I allow myself to heal on all levels. She said as she held my feet that I felt more open, more fluid. We talked about her relationship with my father, how she met with him weekly, and did so much more than give him massages. She helped him in the bathroom, she helped feed him, she worked with his issues as they came up, especially his tummy.

It was quite a session, such a good release.

And then I had to get dressed as a wine salesman was coming over to taste me on some really nice wines.  We sat at the kitchen table listening to jazz and tasted and talked. It was a much better atmosphere for tasting then next to the triple sink at the store.

At 2 o’clock Debby and Liz came over for a writing workshop session. We sat around the kitchen table and discussed a poem I had started at the last workshop and then we did a couple of triggered writings on the spot, one about bicycles and one called “What have you held onto for too long?” There’s probably an infinite number of poems that might come out of that trigger for me… the most interesting one: “doing the right thing.”

After that good friend, Tracy came over with her kids, Jayden and Brody and we had such a nice visit. Jackie was home from work by then and Grandma Peggy came upstairs. Jayden had made me a beautiful large birthday card she had invested a lot of time into and had in big letters, “Happy Birthday Uncle Marky Moose” and Brody brought some big birthday balloons. The kids were so adorable. Brody wanted to know where everybody else was and why there were no other decorations. 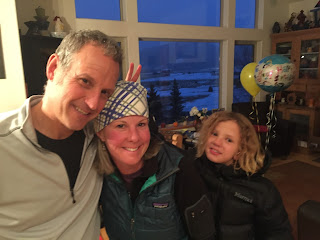 I received so many calls and texts all day long and when Tracy and the kids left I went to lay down for a bit and listened to some of the voice mails and read over some of the birthday texts and called a few people back. As I talked on the phone my phone kept ringing… I lied down in bed and talked on the phone as Jackie prepared dinner until I heard our dinner guests arriving.  My voice was getting tired as was my body, but I did get a second wind for dinner with some of our bestest of friends, Dan and Denise, and John and Laura. By now Howie was home as well and soon enough his good buddy Jackson arrived.  We drank some Barbaresco and Barolo and ate a delicious spaghetti and meatball dinner.  Then cake and gifts, and love and laughter. John and Laura got us a foot massager and when Jackie tried it out she laughed hysterically and almost peed her pants. So we have a new addition to the living room, a foot massager/heater. 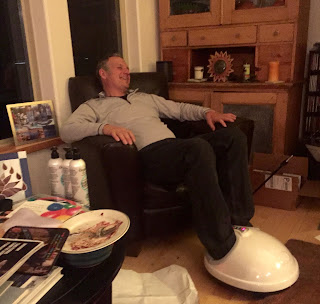 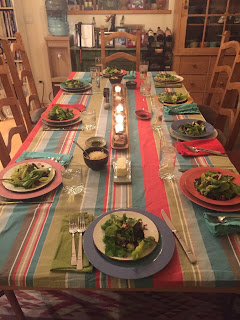 So that was my birthday. Double nickels. I finally have 2 nickels to rub together…

Yesterday was my un-birthday. Stan used to always say on the 26th of December, “Christmas is coming.” And so my un-birthday. We had a 10:15 am appointment with my new naturopath doctor. She had the results of my food intolerance blood test. She took away – sugar, potatoes and fish. No dairy and grains at the same time. No iodized salt. And about a dozen new supplements and homeopathics as we begin a detox… I cried at the counter as I collected all the pills and realized all the foods I was saying goodbye to. I was overwhelmed.

Then we took Peg to the airport and said goodbye to her.
Then we went to Costco, but I just sat in the car.
Then we picked up our coffee order for the store.
Then we went to the co-op for lunch
Then I went to my therapist for more processing.
Then to Staples to buy office supplies for the stores and new office.
Then Jackie drove home through a mild snowstorm
and we stopped at the store to drop it all off.
Then home to leftover spaghetti dinner.