Just had another great energy session with Sara.  We worked together for 2 hours. Sara told me she thought I should have some needles in my chest along my lung meridian. Interestingly enough when Lauren, my acupuncturist took my lung pulse for our first acupuncture session she told me that that pulse was the most compromised. She also told me that the lungs are where you hold all your grief so she wasn’t concerned or surprised. My concern is that eventually your diaphragm and vocal chords can be affected by ALS and that is scary. Knock on wood for the most part my lungs seem strong (thank you yoga breathing) although my voice definitely gets tired especially at night or in loud places.

Sara also felt that Josh, my cranio/sacral energy guy should work on my feet and ankle alignment. All this as she felt a huge release in my neck as she talked to me about my busy life at the store combined with taking care of my family and my father. She imagined me keeping all the tops spinning at the store while fielding questions about my father’s health and the life of my boys and never really having the time or being able to say or express what I was really feeling at any given moment. This was just Sara talking to me about what she was getting mentally while she worked with me – my body, my spirit and my mind.  She felt me opening up and I told her about my blog, she was curious, she was thinking about starting her own blog. Amazingly enough she didn’t know I was a writer! All these years of working on me and I never talked to her about my writing.  I told her what Lisa told me when we visited her in Israel last fall – she was amazed that I wasn’t writing, because the one thing she knew about me for sure was that I needed to write, no choice, Mark has to write! And so when she heard I wasn’t really writing anymore she was alarmed.

I think that is one of the many keys to this illness. I had my emotions on lock down, not a very healthy thing. I always blamed my lack of writing on being just too busy, obviously a bad excuse. Sara and I talked about that me having that outlet is one of the paths to healing.  A way to untie the knots. Sara’s smile as she left the house today was so warming. She was going to her studio to meet Jackie for a session. Yeah! Jackie’s turn!

Otherwise I’ve been spending the rest of today and part of yesterday organizing and paying bills.

Yesterday my outing was to the Hungry Moose baker Ashley’s pie party!  Spent most of the day recovering from the Sagittarian birthday bash combined with some store paperwork.  We arrived at the pie party at around 5pm, tons of cars, kids sledding, and friends all about. A couple of young men helped spot me as I walked from the car thru the snow and into the house. The entryway to the house was a giant pile of shoes. I navigated slowly to a chair around the corner by their Christmas tree right in front of a large table full of delicious pies. Ashley had made 15 pies plus all the ones her friends had brought. I resisted, drank water and talked to people as they took turns sitting in the empty chair next to me. I got to see some good friends I haven’t seen since before my diagnosis. Hugs, kisses, some tears, but it was really good to see people and enjoy the holiday party – best part being the hellos and big hugs from some of the children. 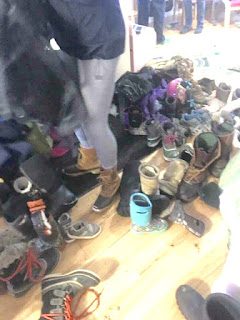 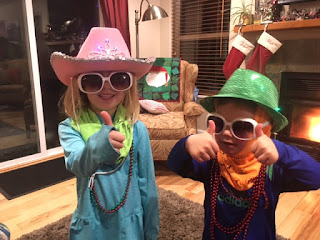 Then back home, where my good buddy Curly was waiting for me with slow roasted chicken and a big salad to watch the Giants-Cowboys Sunday Night Football game. It was a classic cold weather old school defensive struggle with my Giants coming out on top 10-7!!! It was so much fun just hanging out with Curly, Howie (who had Eli in fantasy football) and Jackie and rooting for my GIANTS (pronounced Gee-Ants). Lots of fond memories of many dedicated Sundays spent screaming at the television.