9.1.10
After watching the sunrise from outside our teepees, we went back to sleep for a few hours and then packed up our stuff, had some stale bread and laughing cow cheese for breakfast and rolled out of Nimrod and headed to the Bental Mountain, an israeli bunker and viewpoint of Syria, Mt. Hermon, and the Golan. We wandered around and looked at the views and hiked down into the bunker and imagined what it would have been like to be a soldier during the yom kippur war.
Then it was off to find the Yehudiya Nature Reserve which after a bit of a drive we arrived there at about noon. The reserve guide sent us out on a 3 hour hike to these amazing deep pools of cool water and a waterfall with yet another deep pool. We weren't prepared for a 3 hour hike, but we went for it. We bought a 6 pack of cold water, drove to the trailhead, texted Lisa that we would be much later than I thought and embarked on yet another Mark and Micah adventure.
It was very hot, but we drank water, the hike took you through some super slow swampy water rock hiking, jumping from rock to rock, a good 30 -40 minutes of hiking and drinking water. The trail was full of rocks, not a hard hike, but not an easy hike either. Finally we arrived at the first big deep pool, we stripped down to our bathing suits and got in the water immediately, there were some guys there jumping in from the top of the cliffs so Micah and I climbed out and jumped and yes I jumped too, Micah is just not as good at taking sports photos as I am...
So we jumped and we swam, we checked out the fish and wished we had a fishing rod, then went to the next pool and found even higher jumps. It was awesome. We swam around for at least a half an hour if not more, it was just fun. "Ezeh Kef" (What Fun!)
And then we continued on to the waterfall and swam in the pool beneath that jumping and diving in and just having a good time. And then we hiked out... getting out around 3:15 or so, it was just as long as the guide told us it would be. My phone was going dead so I found a place to plug it in, we got some ice creams - the worker recognized us from when we bought our water - "ahh you made it back - you look tired. how was it?" "It was great, i'm not as young as I used to be, but it was great!" "Ahhh you're not so old." and we sat down on some steps and relaxed. The worker who sold us the ice creams was walking by and I asked him how long a drive it would be to Herzelia, he told me 2 and a half hours, and then he sat down to talk to us. He was a super nice guy, talked to us about living in Israel, his family lived in a town nearby, 200 members of his extended family leaved there. He talked to us about what happened in Hebron - 4 people were killed by terrorists because of the peace talks, and he didn't believe there would be peace in our generation, he felt that there needed to be new education on both sides, the kids need to learn that we need to make peace, not that arabs or jews are evil. He was really interesting to talk to. When we said goodbye, he said to drive safe and Micah said wow that was really cool talking with him...
And then we drove and drove to Herzelia stopping in Hadera for a schwarma. And then found ourselves in Herzelia around 6:15 pm looking for the car return. I called Lisa who had looked it up on the map and she told me she didn't think it would be open, but directed us there via the cell phone while I drove and she was right, It had closed at 6 pm. So she talked me to a spot where I met her and we followed her home.
And then after settling in and saying hello we went out into the streets of R'anana (rhymes with banana) and had some local falafel.
Another great day. 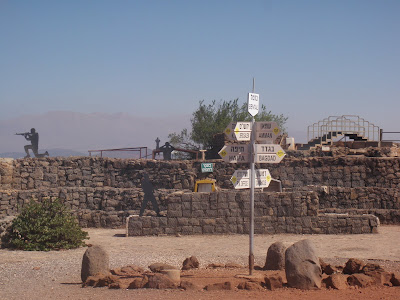 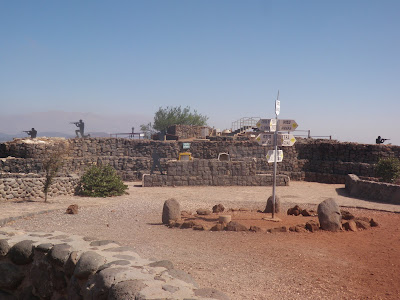 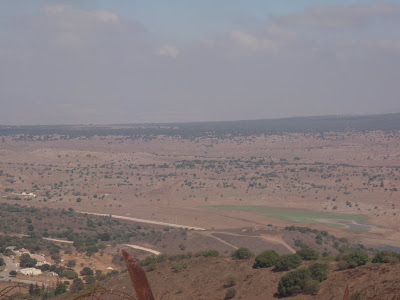 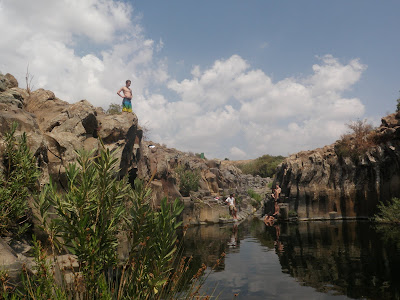 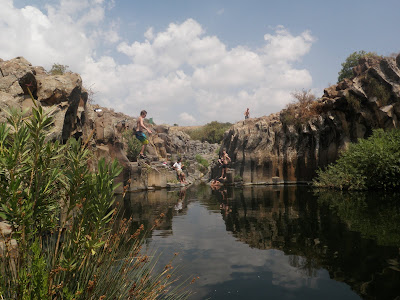 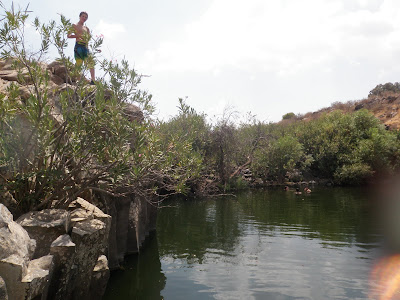 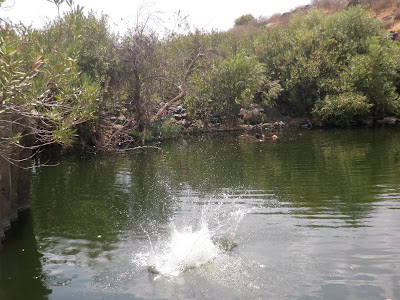 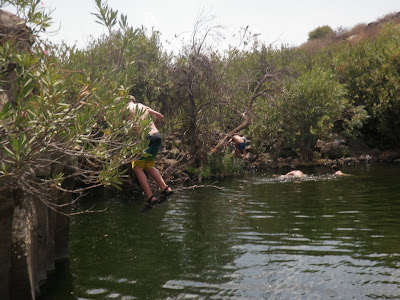 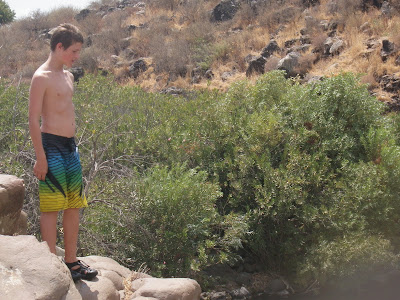 a praying mantis... is he jewish? 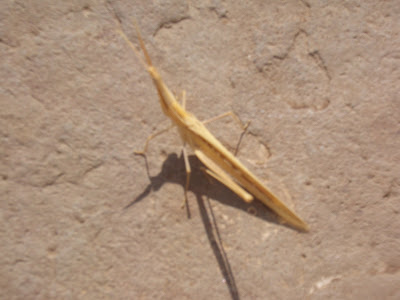 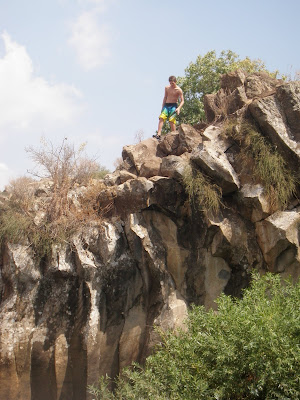 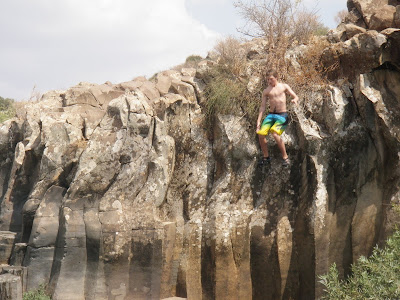 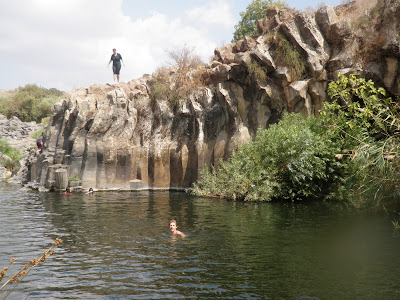 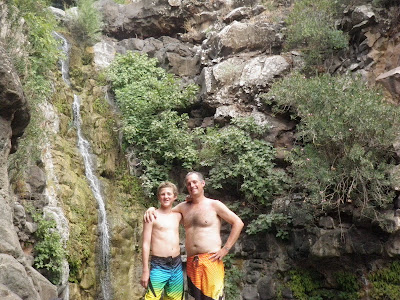 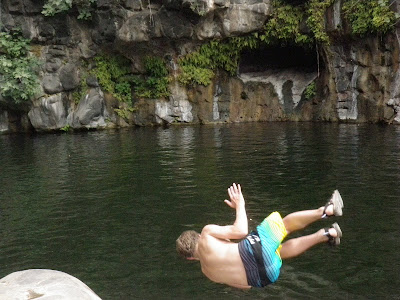 Some rock climbing before his jump by the waterfall... 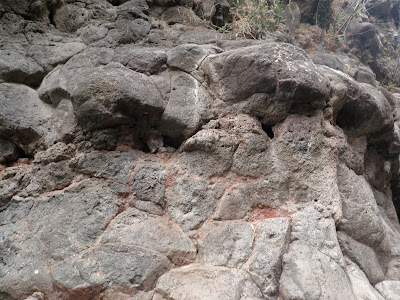 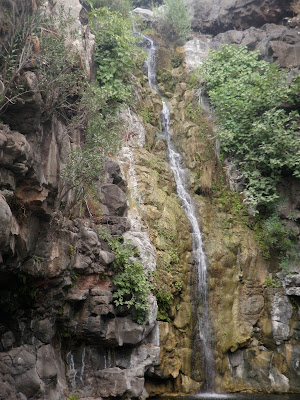 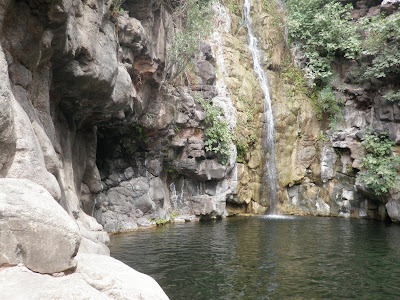