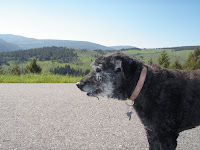 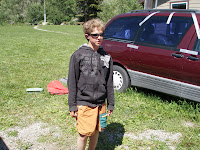 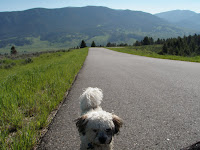 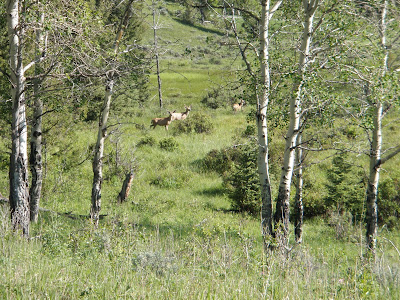 I heard the most amazing story today about Andrew and Sawyer from a most surprising source. This evening at Beth Hoffman's 40th birthday party at the 320 Ranch down by the river on a beautiful Saturday evening (a year from now I hope we are blessed with the same weather, maybe a little warmer for Micah's Bar Mitvah) I was walking and talking with Patty Dickerson on our way back from my car with a jacket and toothpicks as I didn't have any dental floss and Patty says to me, "that's right Jackie's in Kenya with Andrew. Have I told you my story about Andrew and Sawyer?"
"No, I don't think so."
"Well, I saw that article in the paper about them and that made me remember at Jacquie Persons wedding, Andrew, Sawyer, Sawyer's older brother Eli and some other kid were playing outside."
"Jacquie's wedding? that was 1996, they were only 3, that was just a couple of weeks after Micah was born. I remember that day very well."
"Well, I was walking by these kids, and Eli looks at me and says, "Hey, Lady, do you know this kid?" pointing at Andrew. And I say, yeah, that's Andrew and Eli says well he bit my brother. I look at Andrew, a total toe head, did you bite him? Andrew shook his head. Why did you bite him? and Andrew replied "because I don't like him." I never said anything to anyone at the wedding, it didn't seem necessary."

So, Andrew and Sawyer met when they were 3 years old at their parents' friend's wedding and Andrew bit Sawyer because he didn't like him and now they are traveling together in Africa, best friends. Andrew and Sawyer do you have any memory of that?

That was one of the many highlights of a fun-filled busy day - First thing this morning Howie participated in the filming of a classroom DVD with Mr. Sullivan at Ophir School were according to the school principal he definitely hammed it up for the camera. While Howie was doing that I took the dogs for a walk up Porcupine Park. On the way we say 3 young bucks, which Buddy did stare at, but thankfully did not chase. Just before I reached the top of the road a car approached, it was my old friend Guy Fischer on his way to run his dogs. We met up there and Buddy and his puppy Sally just romped and chased a frisbee for 20 minutes or so while Guy and I caught up on stuff. It was a very nice visit with beautiful views.

Then it was back to school, home quickly for Movie Star Howie to change into Little League Baseball Howie and then it was off to the baseball field for 2 games, a barbecue, trophy ceremonies, socializing, and wandering dogs. Buddy did very well - off the lease - until a couple of people told me they thought he was on his 5th stolen hamburger, which I think (and hoping) was just a bun that smelled like a burger, but eventually I tied him up so he couldn't get any more if it were true. (no puking yet, so I think if he did find some, he didn't get that many). At 2 pm I had to head for town to get Micah back from his canoe trip so I left Howie with our neighbor, took the dogs and off to Bozeman. I got there at 3:15, Micah and a couple of other kids were still waiting to get picked up. He looked great, had an amazing time, his counselors told me that one day he had a major allergy attack and a very swollen eye, but Benadryl helped and he woke up the next day, much better. One of his counselors of course was a friend of an ex-employee (She was the daughter of Chas' friend Bobbi!) and we talked for a bit and then it was back home to Big Sky. So Micah and I talked as we drove home and I got to hear how fun it was and the friends he made and how he's better at the front of the canoe than steering in the back. Got home at 4:30, took a quick shower, then it was off to the chapel for employee Cara's wedding at 5:00 which somehow I got to on time. A short and sweet ceremony, Cara was joyfully crying and smiling most of the ceremony.  Then it was a quick stop at the house to check in on the boys, and then off to Beth's birthday party which was also a very fun time. Home by 9 pm. I walked the dogs. Howie and Micah were watching television of course as neither of them (except Howie and I watching baseball) had not watched any "t.v." for a week.

Then Micah started posting pictures to Facebook as he now has all these new friends who facebook. Finally to bed at 11 and I can have the computer to blah blah blahg.