Marky Moose in the Middle

Today is my Dad’s sister and brother-in-law's 63rd wedding anniversary. My Aunt Joan married when she was 19 years old. She met Donald when they were about 15 years old. He was 20 when they got married and 63 years later they are still chugging along…. We will be visiting them next week!

Dad had a dream last night about this oil guy named Jimmy, in the dream he had just died, but dad says he really died a couple of years ago. Not sure what his dream was about, but he was talking about this guy as I drove him to our house to watch the Yankees Texas game tonight. He was trying to remember the guys name and was telling me he had a son named Jimmy and a daughter and another son who played football with Harold and that every time he came into the store he was always looking over his shoulder as if he thought he was being followed or was in danger.

Later in the evening he looked at me with a big smile on his face and said Jimmy Krueger. His name was Jimmy Kreuger and I said I can look him up on the internet and see if he died last week and Dad said, no he died a couple of years ago. On the car ride home he was saying there’s no one for me to ask about anybody, there’s no one left but me… 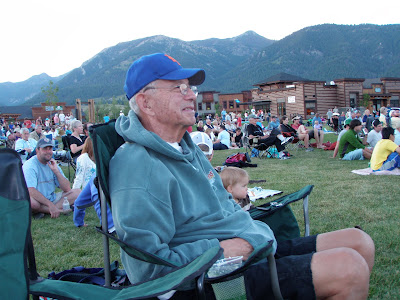 Stan at the Johnny Cash concert this summer... I need to take some recent pics of Dad, but this one was on Jackie's camera from this summer, plus on the bottom check out the video as he sings along! 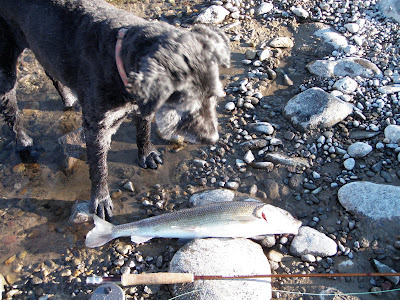 Murray checks out the whitefish we caught... 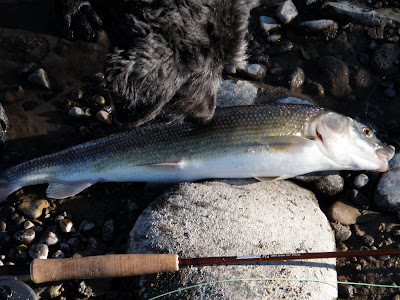 This morning I was woken up by the alarm at 4:30 am, Jackie and Andrew were getting up to go to Seattle and do a college tour of Seattle and Bellingham. Somehow I slept while they were taking showers and getting ready to leave, but as they left at around 5:30, I was awake and restless. Buddy was in the bed with me, which made it hard for me to get comfortable, but even after he wanted down, sleep was not to be . My mind was all over the place. Somehow I was at Uncle Howie’s and Cousin Rachel’s grave site. I was watching Harold shovel dirt over their graves and Louis as well, and then I was and so was Ben and our wives were all standing next to each other watching us and we didn’t stop until they were completely covered. And Jackie telling me how proud she was to be a member of the Robin Family.

And then the writer and star of In the Heights telling Aunt Susan when they met (maybe at a Simon’s Rock event?) how troubled Rachel was – when is the movie coming out I wonder.

And the store, the employee evaluations, and refinancing our loans, and how and why does one thought connect to the next as I write this different thoughts come to mind and connect, but this morning, it was all anxiety, one thing after the other, tossing and turning, not wanting to get out of bed, though for me getting out of bed and doing something is usually the cure for any anxiety attack, thinking about my Dad, Andrew and Jackie and Micah and Howie, and the store, and my hike the other day and my epiphany about who I am, Marky in the Middle, and then finally at around 7 just getting out of bed and starting my day.

Getting the kids some breakfast, actually they got their own breakfast, I made Howie a lunch, I fussed on the computer, trying to clean up our e-mail accounts. Then after helping the boys get ready, remembering it was picture day, walking the dogs down to the bus stop, trying to get Buddy to put pressure on his back left leg, instead of hopping all over the place which is easier and quicker for him. Then back home, checked e-mails, did some stuff around the house, laundry, dishwasher, fed the dogs, gave Murray her pill, then off to work.

Work was fine, it was very quiet at the store. I am really trying to be Mr. Positive at the store these days. Buying lots of stuff for what we are hoping is going to be a busy winter. Somehow had time to start updating the wine inventory list for our website. I looked over this to do list I wrote up for myself to make sure I get my work done at the store, and without looking at it, I’ve got most of it done. Dad came over for coffee and I picked him up at his house around 2 pm – leaving work early so we could go home and watch the Yankees game. I needed to get home to the dogs – I was worried about leaving them too long,

Went down to the river around 4:30 pm after the Yankees looked like they had the game wrapped up so there will be another game tomorrow. Murray needed a walk and I needed some river time. I caught one huge whitefish – thought it was going to be an absolute huge measurement, but from the photo I’m guessing it was about 21 inches long… it even put up a little fight when it saw Murray trying to get her nose in there…

Then it was back home where the boys were snacking having just got home from basketball practice. My cell phone rang a few times, Jackie, my brother Lou, the bank, that was all during the game or my walk down to the river. Jackie called again while I was making dinner. Seattle is great, they are having an amazing time, saw an amazing Picasso exhibit in Seattle via Paris, a super cool chapel which is considered one of the seven wonders of the world by this woman they met at the chapel, going to a concert tonight, busy busy busy, a full exposure of college life in Seattle…

We ate dinner at the start of the Giants-Philly game and then Dad and I watched the game while Micah and Howie veged downstairs, I got them to come up for the exciting bottom of the ninth in which the Giants won the game…. then drove Grandpa home and then put the boys to bed after turning Howie’s night brace and making sure he had his rubber bands on. Tomorrow I am taking Stan to town to try to get a few things done off his chore list. I figure I should just stay up and blog tonight because I’m not sure how fast sleep will come to me. Though I am tired, I think I have sleep anxiety when I am alone…. I’m sure writing and then reading in bed will put me to sleep.

I have lots of pictures to load – we went on 2 amazing bike rides/hikes with Dan and Denise - one all day bike and hike up Bear Basin on Friday and then with the kids on Sunday we drove just past Old Faithful and biked to Lone Star Geyser – and hiked around the Firehole River which floats on by. Lone Star Geyser is a geyser that goes off every 3 hours and we somehow just hit it lucky – after hanging out and eating lunch and exploring the area, it went off big time…. My joke on Sunday was creating a tongue twister… How many geezer geyser gazers does it take….

This was a sink hole near the start of our hike up bear basin. 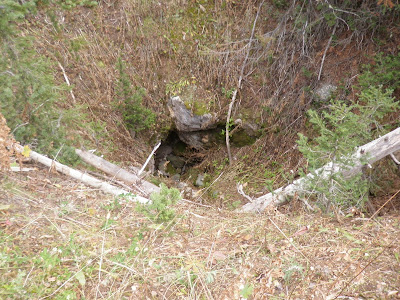 We were checking it out, wondering if a bear lived down there... 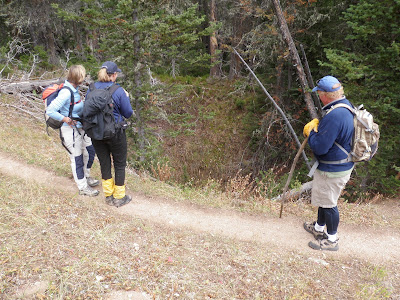 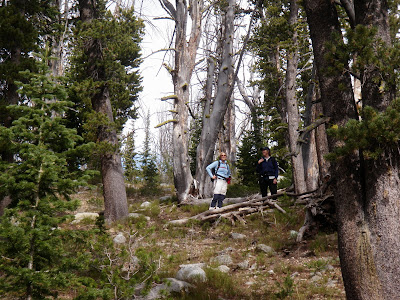 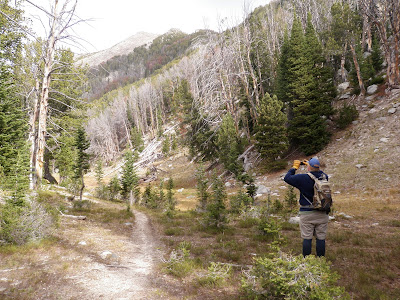 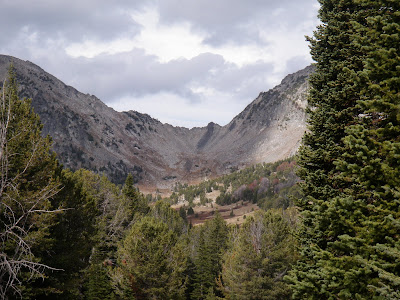 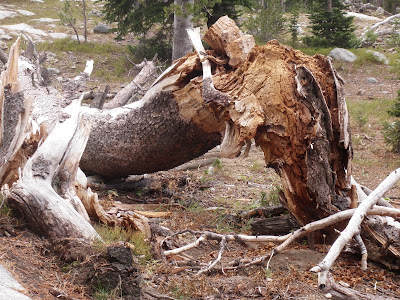 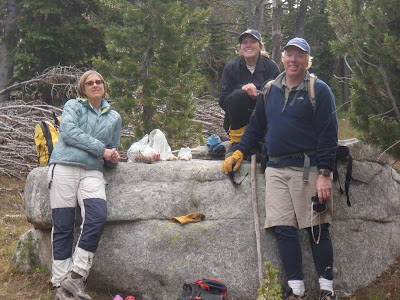 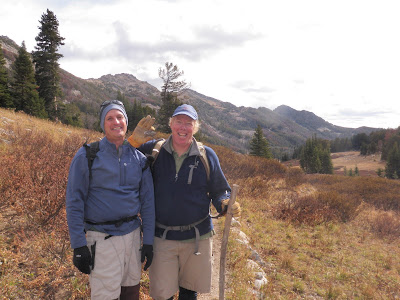 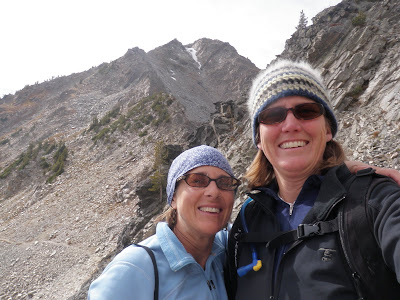 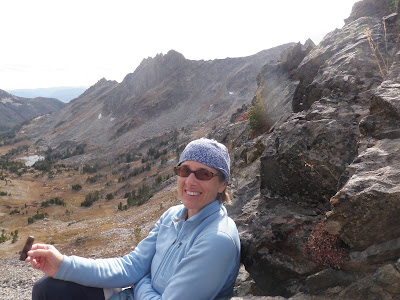 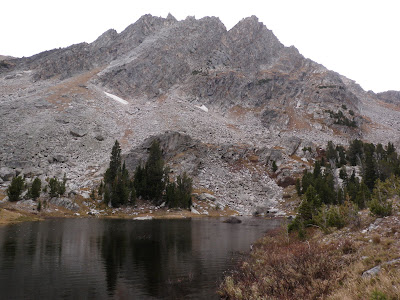 On Sunday we rode our bikes with the kids to Lone Star Geyser in Yellowstone, nearby we checked the temperatures of lots of small hot springs - temps ranged from 120 - 212 degrees! 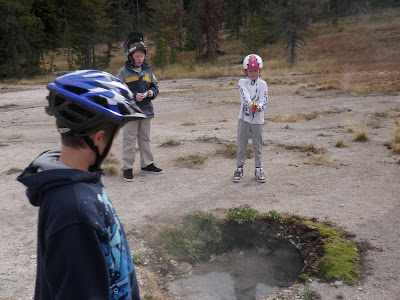 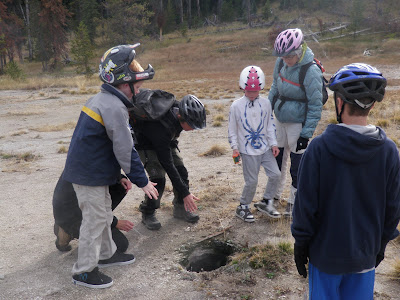 The Lone Star Geyser is getting ready to blow... 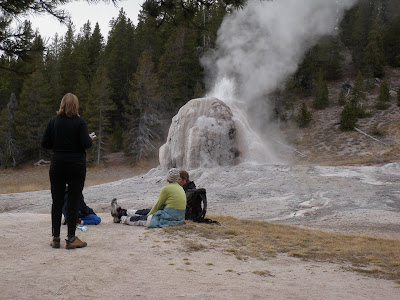 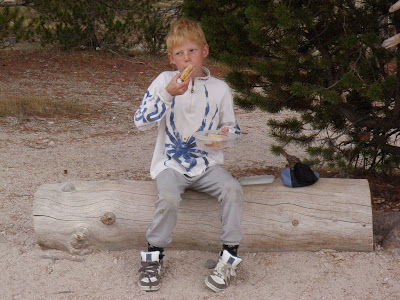 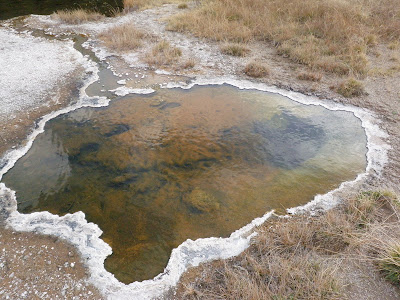 There it goes! Check out the video at the bottom... 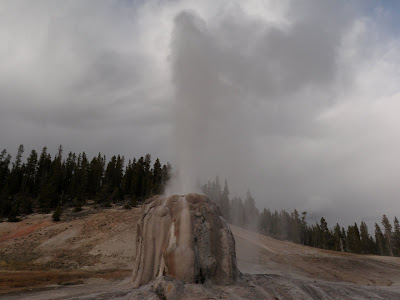 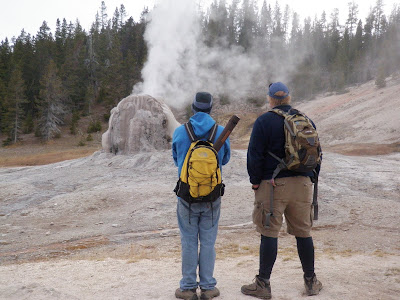 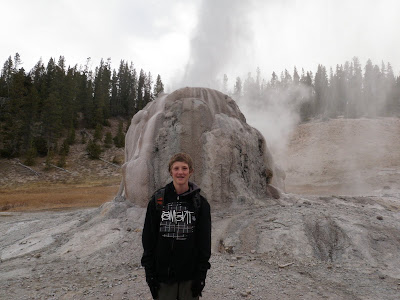 The view from our porch the next evening.. 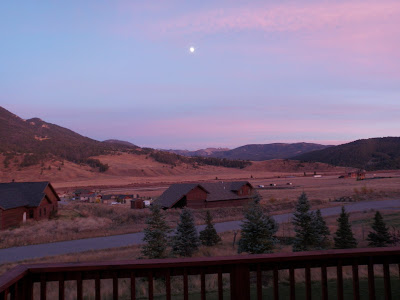