Saturday, 10/1/2011
and what a day it was!  The Lone Peak Big Horns played 6 man football today against their "crosstown" rivals the West Yellowstone Wolverines in their first historic matchup and it was definitely the beginning of a rivalry for the ages.  At the end of regulation the score was 19 - 19.  The Big Horns had 2 touchdowns, with a one point and a two point conversion and a field goal.  The Wolverines had 3 touchdowns with one successful one point conversion.  6 man football is a super fun game with special rules, a kicked extra point is worth 2 points, while if you run it in it's 1 point.  Field goals are worth 4 points.  The Big Horns were winning 7 - 6 at the half, went ahead 11 - 6 in the 3rd quarter, were losing 12 - 11, then 19 - 11 and then with less than 2 minutes left in the game tied it up with a touchdown and a kicked 2 point conversion.  Then with seconds left in the game attempted a field goal which fell short and wide.  Then Overtime!  In overtime the Big Horn's scored easily and then the Wolverines after crazy penalties called on both teams in a crazy finish fell just a few yards short for an amazing and exciting Big Horn win.

I was running the scoreboard, which means mostly running the time clock, and keeping score, and letting the fans know the down and the yards to go.  Of course during the overtime the clock decided to lose power, but I was able to reboot and get it back on pretty quickly and in overtime there was no running clock so it was hardly noticed.  It was such an exciting game and the kids were thrilled with their victory.  Another great community event.

At the start of the second half my cell phone rang.  It was the store.  I wasn't able to answer it.  Then I received 2 texts.  The grease trap was backed up and overflowing and flooding and stinking up the store. Nice.  At one point I called the store and told them I couldn't help them as I was on the scoreboard and couldn't even talk.  About 5 minutes after the game ended the phone rang, it was the store telling me that they couldn't get it fixed and they were calling a plumber.  Remember, this is a Saturday, and by now it's after 5 pm.  So what to do?  Stan was at the game and I needed to take him home.  My buddy Dan told me he would help me, he had an idea what was wrong, so he headed down to the store, I took Stan home and then met him at the store.  I told Dad what was going on and he quoted Grandpa B ( my mom's dad who owned a bakery), "it wouldn't happen in a jewelry store."  So I got Dad situated at home, got the baseball playoffs on his television and went to the store.

Dan was full on head in the grease trap, plastic garbage bag on the floor beneath him, another one wrapped around his arm as he tried to unstuff the stopped up smelly dirty greasy grease trap.  In minutes I was on the floor and both of our heads were in the grease trap trying to loosen up the stoppage and figure out the answer.  After about 90 minutes of knees on the floor, head and arms in the grease trap working with a shop vac and a water hose and getting nowhere I finally just told the plumber to come up and pay the time and a half.  Dan and I headed to my house finally for a celebration dinner of the big Lone Peak Big Horn victory!

Yesterday, Howie's 6 man middle school team had a game against Lima and they won 40 - 20 in an exiciting fun game which Howie got to play in on offense and defense!  In this game I was on the chain gang moving the down marker on the sidelines and was right there for the action for the crunching of the pads and the players.  Howie was tackled a few times right in front of me, and he miraculously got up each time no problem.  It must be nice to be young and flexible! 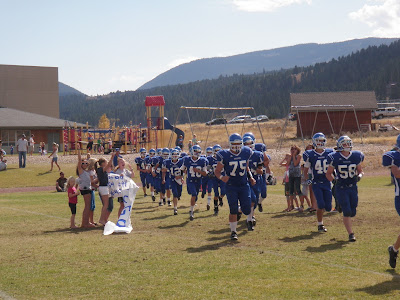 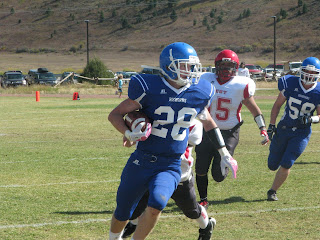