Mondays. Payroll. Do Deposits. Pay Bills. And now take back over all the Monday ordering from numerous vendors. Today was connect with Chelsea and refamiliarize myself with everything that I used to do on Mondays. Called the flower people and doubled our flower order through Easter. Looked over Chelsea's stuff who was diligently organizing everything for me. Plus worked in the back at my stand up desk (with my back to the triple sink) organizing bills, taking phone calls, making orders, checking on things, talking to employees, eating breakfast, drinking coffee, checking website orders, responding to e-mails, trying to getting it all done, mostly succeeding, the usual.
Did a grocery delivery to the Yellowstone Club, then one up to the Summit, then back to my computer. Didn't really have time to finish, kind of left in the middle of bill paying. Had to leave by 3:30, so I could be home for Micah and Howie, then off to Hebrew School stopping to do a couple of quick chores, dropping off frames with broken glass at the frame shop and stopping at Honda to pick up Micah's Bar Mitzvah book which he left there inadvertantly the other day.
We got all our boxes from the house upstate today, pictures (one with broken glass), and dishes mostly, will have to go through it later. Everything is out of the house, and the do it yourself network is already knocking it down to renovate it. You can see the house Jackie and I were married in get completely renovated and get a chance to win it back for us at the blog cabin website: http://www.diynetwork.com/blog-cabin/index.html Let me know what you think!
Yesterday was a really fun Sunday. Jackie and I and the Hungry Moose did a food station for Lone Mountain Ranch's Glide and Gorge, a cross country ski day where people would ski from one station to another drinking wine and eating good food. It was a beautiful sunny day, it was a well attended event and it was really fun. Jackie and I took turns skiing and working the booth, and George brought some great wine for everyone to taste. 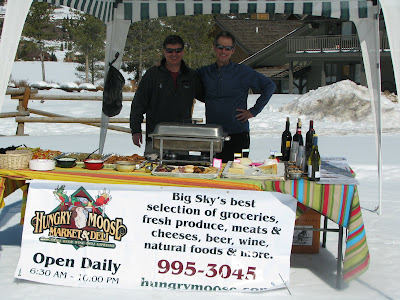 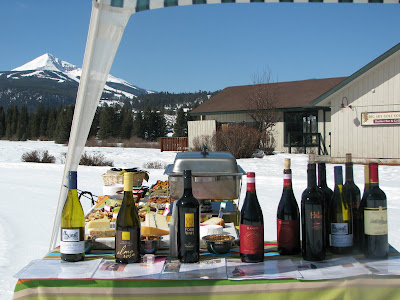 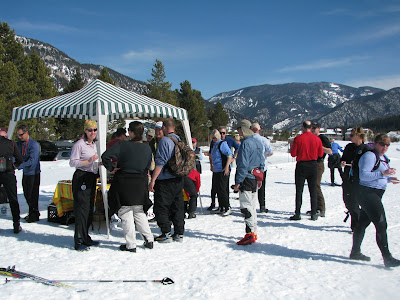 so Sunday was a bit of a work/fun day as I had to get to work early and run the grocery so everyone else could work in the deli to get all the food ready. The had to take all our stuff over to our skiers station, our tent, tables, and everything else. Then a little after 3 pm we broke it all down and loaded it into our cars and Jackie and I took one more skate around the golf course. It was fast skiing, and such a sunny day. I think everyone truly had a great time. Then just as I was heading home from the store, Holly and Emelyn who both helped get everything ready in the morning and who were both done with work were walking by the store with jelly jars and straws and insisted on taking me to the Lotus Pad for a faceplant a.k.a. a dirty girlscout. So after saying, "I've never had a dirty girlscout," these 2 girls took me up to the bar and we did a shot, chatted with some other ladies at the bar, and then went on our separate ways...
Saturday was a busy day in the store and after all the deliveries were done, Emelyn and I were downstocking together, Emelyn on the ladder and me in the aisles catching the groceries to restock. "I need a crunchy," I told Em, "one doesn't get to say that everyday." She laughed, "you've still got it, Mark." We continued down the aisle and I said, "I'll take 2 extra virgins and a zesty italian..."
Posted by mark at 10:23 PM